Home » TYPES » Herbs » Villarsia capensis
Back to Category Overview
Total images in all categories: 11,901
Total number of hits on all images: 7,142,272 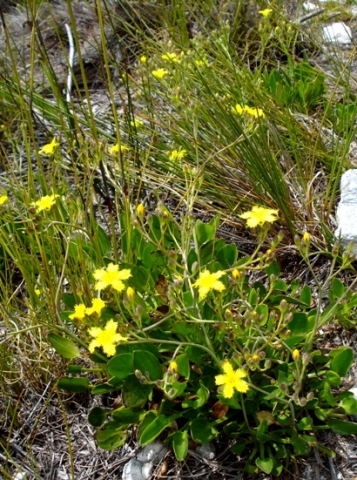 Villarsia capensis, the Cape bogbean, is a soft perennial with tufts of basal leaves. The green, ovate to oblong leaves grow on long, sturdy stalks that will stretch sufficiently when needed in fresh water to hold their blades above water. Recorded plant heights vary accordingly, ranging between 5 cm and 1 m. Leaf margins are usually smooth, sometimes dentate (toothed) and tending to be irregularly shaped.

The distribution is the Western Cape from the Cape Peninsula to the Eastern Cape as far east as Humansdorp.

The habitat, easily guessed from the bogbean common name, is swampy land and open water. The plant is not considered to be threatened in its habitat early in the twenty first century (Bean and Johns, 2005; iSpot; JSTOR; www.redlist.sanbi.org).