Home » TYPES » Herbs » Utricularia bisquamata flower
Back to Category Overview
Total images in all categories: 11,506
Total number of hits on all images: 6,494,219 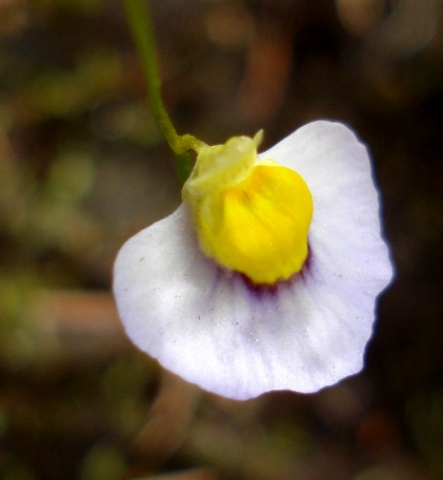 The flowers of Utricularia bisquamata are borne in small racemes on thin stalks. Two-lipped, the corolla colours comprise white, lilac and yellow. The upper lip is small, bilobed and cream-green. It can be seen at the top of the flower in picture, similarly coloured as the upper part of the wiry flower stalk.

The lower lip is much more conspicuous. It has a large, white and rounded outer fringe, hardly lobed in picture, but sometimes markedly so. The lip spreads horizontally in roughly a semicircle to the front of the flower with just a hint of lilac upon it. This lilac colouring is accentuated where the flat white fringe joins the yellow central bulge of the lip.

This prominent yellow bulge, known as a palate, is a protrusion that closes the throat of the bilabiate flower. It resembles similar palates upon for instance Nemesia and snapdragon flowers.

There is a spur growing from the lower corolla lip, mostly pale lilac in colour and hidden here below the lip's broad white fringe. The shape, colour and size of these flowers vary considerably across plants found in the extensive distribution area of the species.