Home » TYPES » Herbs » Tricliceras laceratum flower
Back to Category Overview
Total images in all categories: 11,506
Total number of hits on all images: 6,494,409 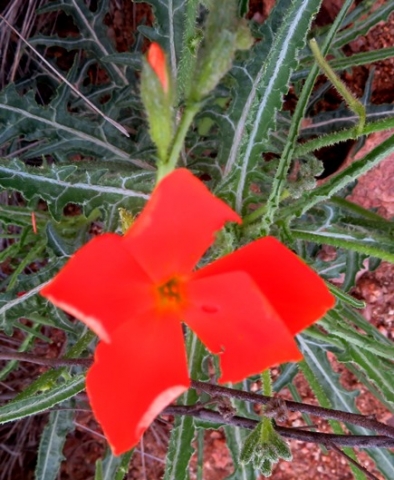 The flowers of Tricliceras laceratum grow well-spaced in a willowy, few-flowered raceme. The flowers develop one at a time and tend to face to one side of the stalk (secund).

Small, pointed green bracts, hairy like the flower stalks, are found at the base of each thin stalk. Five hairy green sepals cover and hold the base of the long, thin corolla tube while about covering it.

The five brick-orange corolla lobes with rounded or pointed tips are obovate in shape, wider near the tip than the base; in picture nearly rhombic. The lobes spread around the tiny, star-shaped, yellow flower mouth in a radially symmetric shape or actinomorphic, a little poppy-like in appearance.

The thread-like stamens are positioned opposite the sepals, visible in the corolla throat. The outside of the corolla is markedly paler in colour than the inside. The superior ovary, ellipsoid in shape, has only one locule; the bristly fruit into which it becomes transformed flexed downwards.