Home » TYPES » Herbs » Tribulus zeyheri subsp. zeyheri
Back to Category Overview
Total images in all categories: 11,921
Total number of hits on all images: 7,168,397 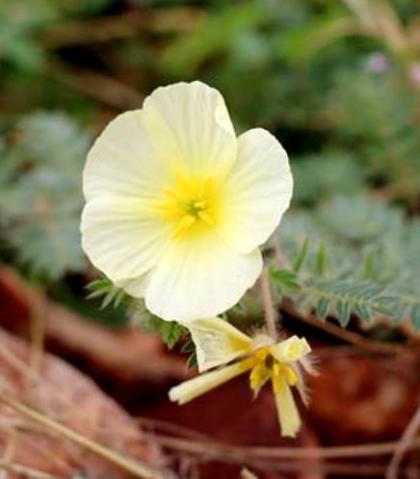 Tribulus zeyheri subsp. zeyheri, commonly known as a calthrop or large-flowered devil-thorn and in Afrikaans as dubbeltjie (little double), or morphed into duwweltjie, is a prostrate annual or perennial herb growing trailing, branched stems up to 25 cm long.

Most plant parts are covered in bristly hairs. In picture, particularly the sepals on the withered flower attest to this. The ovary of the open flower is green, on the old one brown. The narrow, yellow anthers angle up, their filaments emerge from around the ovary.

The once-compound leaves are opposite, from seven to thirteen pairs of leaflets growing from the sides of the central rachis. The ovate to obliquely ovate leaflets are angled slightly forward, their tips acutely pointed. The leaflet midrib is whitish, conspicuous in the photo on the dark green leaflets covered in silky hairs on their lower surfaces.

The subspecies distribution is in the Free State and Northern Cape to Limpopo and in some neighbouring countries.

The habitat is exposed, dry, sandy flats, often on disturbed and overgrazed land. The plant is not considered to be threatened in its habitat early in the twenty first century.