Home » TYPES » Herbs » Tribulus terrestris
Back to Category Overview
Total images in all categories: 11,523
Total number of hits on all images: 6,599,540 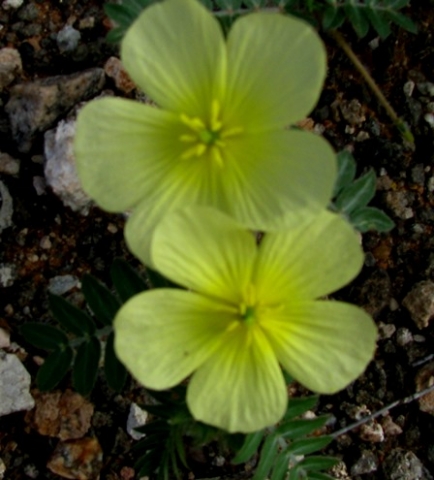 Tribulus terrestris, commonly devil’s thorn or in Afrikaans dubbeltjie (little double), is an annual that branches into many prostrate stems becoming up to 1,5 m long. The common name, puncture vine, seems to also be in use. The plant is generally hairy, the hairs long and whitish.

Solitary yellow flowers grow from leaf axils. The five petals spread or form a shallow bowl. The petals have rounded to flat tips, longitudinal pleat lines and in picture a darker yellow lower part. There are ten stamens with cylindrical yellow anthers.

The hard fruit, initially green, has long rigid spines and small spinules. About all that walked barefoot in southern Africa as children remember the fruit, if not the flower. The generic name is derived from the Greek word, tribolos, meaning three-pronged or three-pointed. The specific name, terrestris, is Latin for of or on the earth or land.

The species is found throughout southern Africa, the plants growing on sandy flats and disturbed places. The species is not considered to be threatened in its habitat early in the twenty first century (Manning, 2009; Van Wyk and Malan, 1997; Andrew, 2017; iNaturalist; http://redlist.sanbi.org).