Home » TYPES » Herbs » Thunbergia natalensis flowers
Back to Category Overview
Total images in all categories: 11,523
Total number of hits on all images: 6,599,442 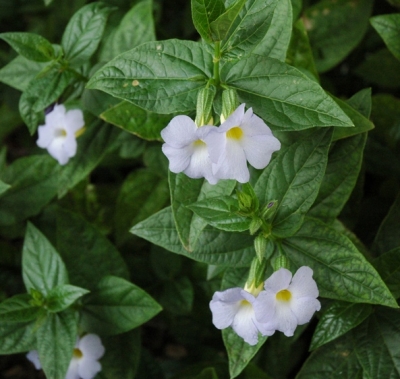 The dwarf thunbergia or Natal blue bell is a hairy, erect herb up to 1,2 m in height. It produces slender stems covered in dark green, stalked or stalkless, opposite leaves that are ovate in shape with toothed margins. The leaves are about 8 cm long and 5 cm wide.

The flowers have five broad, light blue or mauve petals at the end of funnel-shaped tubes that are yellow inside. Veins are conspicuous upon the corollas. Flowering happens from before midspring to after midautumn.

This plant grows in from the Eastern Cape and KwaZulu-Natal to the Mpumalanga and Limpopo Lowveld, also beyond the border in tropical Africa to at least Kenya.

The habitat is forest edges, grassland or bush. The species is not considered to be threatened in its habitat early in the twenty first century.

This is a common garden plant, propagated from seeds in spring, watered well during summer and cut back during winter. It is frost resistant (Pooley, 1998; www.plantzafrica.com; http://redlist.sanbi.org).