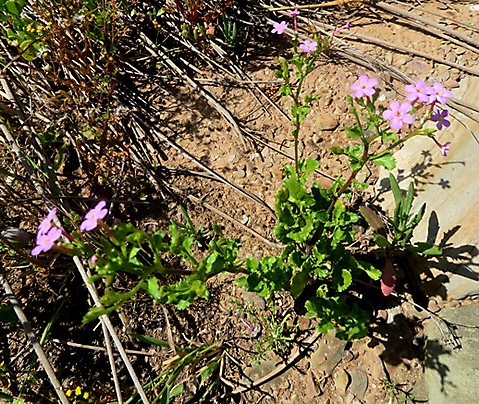 Sutera foetida, commonly known as the skunk bush or in Afrikaans as stinkbossie (little stink bush), is an annual that reaches heights from 30 cm to 1 m. It may sometimes be a short-lived perennial.

It appears that when the Sutera genus was reviewed early in the twenty first century, three species including this one remained in Sutera, not moved to Chaenostoma, Jamesbrittenia or other destinations.

The species distribution is in the Western Cape and slightly into the southwest of the Northern Cape in Namaqualand. The photo was taken near Barrydale.

The plant grows on flats and slopes among scrub, often shaded by other vegetation or rocks. The species is not considered to be threatened in its habitat early in the twenty first century (Vlok and Schutte-Vlok, 2015; Bond and Goldblatt, 1984; iNaturalist; http://redlist.sanbi.org).