Home » GENERA Q-S » Streptocarpus » Streptocarpus pusillus
Back to Category Overview
Total images in all categories: 10,526
Total number of hits on all images: 5,178,809 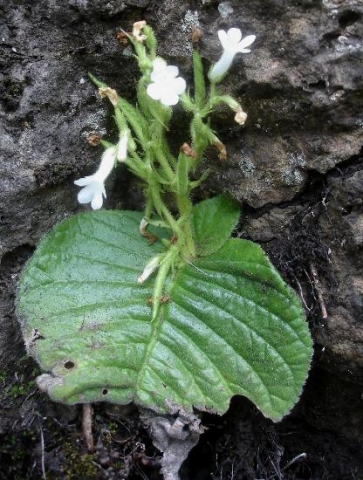 Streptocarpus pusillus is a stemless perennial that grows one or two leaves. The shiny and hairy leaf seen here is ovate in shape, positioned flat on the ground, damaged without its tip. A tiny second leaf, recently emerged and pointing in the opposite direction to the big one, can be observed at the base of the plant. The leaf has a conspicuous sunken midrib and parallel lateral veins to the margins, curving slightly towards the tip near the margins.

Flowers are borne on erect, green, hairy stems. The white flower is two-lipped with a long hairy corolla tube and five rounded lobes. The smaller lip has only two shorter lobes. The corolla is fleshy, with shiny cells glistening on its surface. There are two stamens in the tube that cohere face to face and a white stigma, protruding further than the stamens. The plant is monocarpic, dying after flowering.

The plant distribution is in the KwaZulu-Natal Drakensberg, slightly into the Free State and Eastern Province, also in Lesotho. This plant was seen in the Drakensberg on the border between Lesotho and KwaZulu-Natal during January.

The habitat is cliff faces, banks in kloof forests and mossy rocks at elevations from 1200 m to 2600 m. The species is not considered to be threatened in its habitat early in the twenty first century.