Home » TYPES » Herbs » Strelitzia reginae white petals, not blue
Back to Category Overview
Total images in all categories: 11,662
Total number of hits on all images: 6,774,637 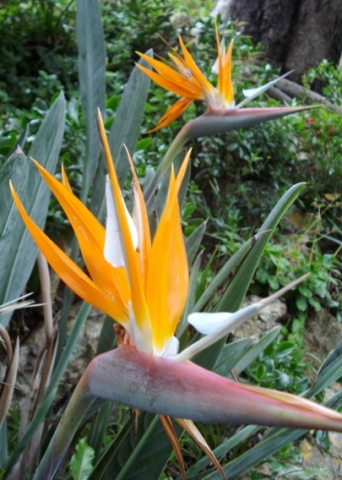 Every Strelitzia reginae flower that emerges from the horizontal spathe consists of three large orange sepals held in an upright position in bloom.

Three smaller, usually blue petals follow them; on this plant they're white. The larger two of the petals are fused like an arrow tip, holding the anthers and style safe but available for action.

The third petal, differently shaped, houses the nectar at its base. Without nectar the insects and birds won’t visit and the pollen won’t be transported (by them without their noticing) to other flowers.

Pollination and cross-pollination, the depositing of pollen upon the stigmas of other flowers and flowers of other plants of the same species ensures species survival. Strelitzia is just one of very many plant genera on earth dependent upon animal mediation for its pollination; everything among the living being related, closely or distantly.

The bird perching upon the Strelitzia flower to drink nectar ends up with pollen on its feet. This involuntarily offload, wherever it lands for the next sip of the same juice, is not noticed; birds don't wash their feet.

Much of the pollen ostensibly goes to waste. It serves as food for whoever; many of whom still nameless as we're still learning. It may also merely drop to the ground, fast or slowly, becoming an immediate or eventual additive to the soil. Nothing is really wasted in the earth’s great pool of resources for tomorrow (Manning, 2009; www.plantzafrica.com).