Home » TYPES » Herbs » Strelitzia reginae leaves angled like satellite dishes
Back to Category Overview
Total images in all categories: 11,662
Total number of hits on all images: 6,774,692 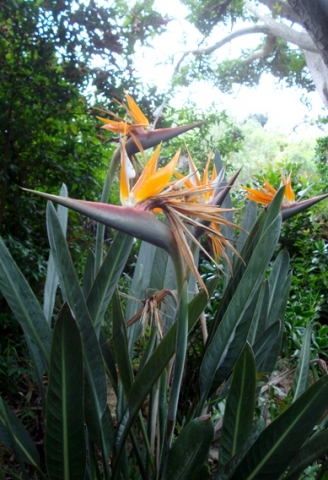 This unusual plant, a South African monocotyledonous perennial, is a famous export product of the Eastern Cape, now a cherished vegetation buddy of people the world over. Originally the plants were found among Fish River scrub and dry river valleys from Humansdorp to King Williams Town.

The long-living stemless plant consists of a clump of large elliptic leaves usually veering at a jaunty angle, like teenagers on a street corner. Evergreen, the leaves are stiff, elliptic in shape on long, sturdy petioles, sometimes reaching over 1,5 m in height.

The sequencing of flowers in one spathe may be observed in this photo: The old one on the right is dry and brown, the young one on the left has raised bright orange sepals from the front end of the boat-shaped covering that is the horizontal, pointing spathe, the flower base (Manning, 2009; Gledhill, 1981; www.plantzafrica.com).