Home » TYPES » Herbs » Strelitzia reginae green fruit
Back to Category Overview
Total images in all categories: 11,632
Total number of hits on all images: 6,749,760 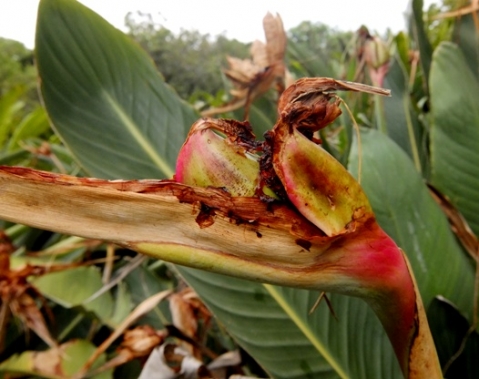 The fruits of Strelitzia reginae are large, still green in the photo. They are positioned in a row, similarly to the earlier flower sequence in the boat-like spathe. In this case only two fruits have formed. Some floral remains are persisting on their tips.

The fruit is a three-angled capsule, its seeds growing in three separate locules. The green fruit is initially leathery, becoming hard and woody as it ripens. It splits from its tip in summer to release the seeds.

The numerous small seeds are black or brown, globose i.e. almost spherical in shape, attached to woolly, tufted, orange arils. These seeds are eaten by birds, obliging to disperse them in return for being fed, oblivious of the transaction (Pooley, 1998; www.plantzafrica.com).