Home » TYPES » Herbs » Strelitzia reginae has beaten botanical xenophobia
Back to Category Overview
Total images in all categories: 11,413
Total number of hits on all images: 6,190,273 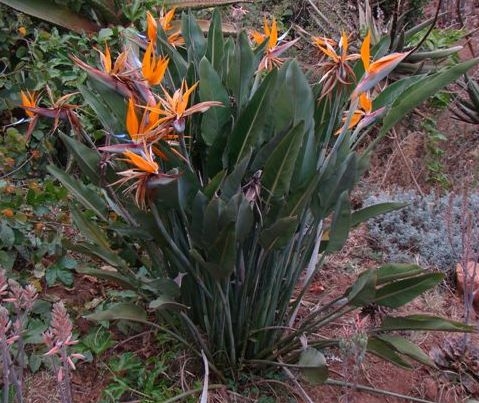 Strelitzia reginae of the Eastern Cape counts among the world’s most admired garden and cut flower species. It is a huge item in the florist business in many parts of the world.

South Africans are often not aware of how many of their indigenous plants, including this one, are established global citizens. Gardens of the world are often as cosmopolitan as any city's human population can hope to be (although sometimes striving to be the opposite). Even as the earth would be much more sparsely populated if people weren't such habitual nomads, food and flower production would have been so much smaller if plant mobility had not boosted growth.

Mobility of species brought diversity and complexity to the earth's overall living system. This underpins survival and quality of life for humanity and nature at large, upon which humans are totally dependent. Would that sufficient tolerance and good sense be grown among people to uphold it all.

Enormous plant species mobility has happened naturally since the earth acquired its first plants. Think of a place of birth for a plant species, a small area, originally one spot, where each had flowered for the first time. This is history beyond the capacity of historians. Might there one day be time travel historians to fix all of this? They won't believe their eyes! And nobody of sound mind would believe their story. Such innovations have already happened on earth way back.

People only started knowing and valuing some of the plants of the world late in the earth's biological history. This is primarily because they arrived here so late themselves, but also because their minds turned to science and education more slowly than to war and wealth.

For maybe twelve thousand years or so people have, since they had become farmers, traipsed across the face of the earth, carrying with them admired or useful plants, cuttings or seeds for planting near new homes. The "admired" part surely came later only, when rich minorities had formed in the class structures for commandeering slaves. The early runners from disaster may have carried a few seeds of food plants, if anything. Only of late, in recent recorded history have people discovered that transporting plants to faraway places may have dramatic unintended consequences.

The number of invader and escapee plant species in many parts of the world, the failed human interventions turned into disaster are many, next to the ongoing natural migratory spreading of species in nature unaided by people. Tales of unwelcome proliferation of imported plants, replacing indigenous species as noxious weeds abound in recorded history.

The absence of an immigrant plant's natural enemies may cause it to multiply too fast and too far, usurping untold space as an alien invader, while obliterating the wanted, used species.

It usually starts with an innocent, isolated little story about a cute plant that had never threatened anything in its home country and was only an idea for somebody's garden. Such plants are today combatted in many places using enormous resource allocations and sustained effort, though often too late and in vain.

Much of what happened in this regard may remain hidden in incorrect record keeping worldwide. Known natural migration is regarded as "indigenous but recent", the effects not always positive, but at least it was nature's doing. Conventions of only accepting the oldest species list beyond the horizon of first recorded changes to be indigenous, would be counterproductive; in human population politics this would cause insurmountable chaos.

All of this because the "immigration botanists" of the world are latecomers, opened shop after many botanical horses have bolted. Measures have been put in place in modern times to prevent offensive invader plants from slipping under the radar into countries protecting their own vegetation. This has resulted in every would-be globe-trotting living species (people as well) to require immigration papers these days! Plants are also susceptible to persecution in xenophobia attacks.

It is interesting to note how much is being done to protect biological equilibrium today, how much the knowledge base has grown, but still how ineffectual many campaigns for "saving" chunks of nature on earth still are or will ever be.

Strelitzia's stiff evergreen leaves and long flowering season make it a welcome gardening item wherever the climate is not too cold. Pea-sized seeds are released from the woody fruit capsule, divided into three locules that split open when ripe. Sow them fresh in spring according to instructions obtainable from the informative www.plantzafrica.com page on this plant.

As far as is known S. reginae has never, nowhere become a weed, a problem or a pest. Maybe it never will, as it has been introduced so widely already.  But we simply do not know which species will cause the next ecological accident or disaster and where.