Home » TYPES » Herbs » Strelitzia juncea
Back to Category Overview
Total images in all categories: 11,538
Total number of hits on all images: 6,618,354 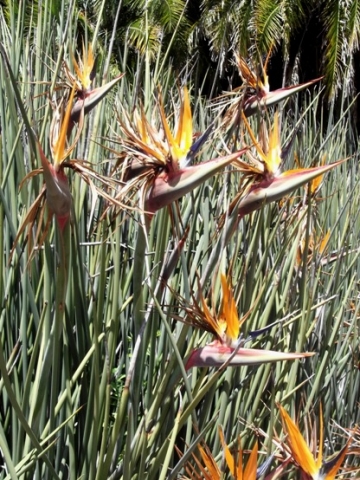 Strelitzia juncea, the rush-leaved crane flower, is an evergreen perennial reaching heights beyond 1,5 m and spreading as widely. A monocot herb, the plant grows a rush-like tuft of many stems from a mass of fleshy roots. This specimen was seen in November in the Caledon Wildflower Garden.

The stiff, straight and leafless stems represent the defining characteristic of the species. Poker-like and cylindrical, without leaf blades or merely tiny, narrow ones on young plants, only stems remain on mature plants. These stems serve well as leaf substitutes in photosynthesis, rendering leaf blades redundant.