Home » TYPES » Herbs » Strelitzia juncea starting off
Back to Category Overview
Total images in all categories: 11,632
Total number of hits on all images: 6,749,684 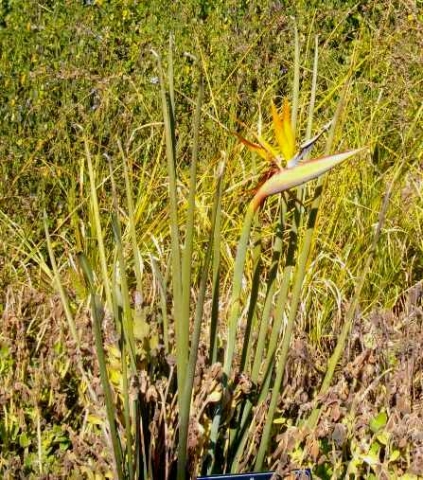 This young Strelitzia juncea plant has a yellowish tone to its stems. Stem colour is often blue-green or grey-green in this species. The narrowly pointed, cylindrical stems lack leaf blades. They tend to become a little taller than the thicker flower scapes.

Stems, acting as leaf substitutes will increase in number, forming a robust tuft or clump, large, dense and spreading steadily over a good many years. The tuft does not spread via suckers, but by dividing in the centre of each fan-like leaf group. Garden plants may be multiplied by dividing the tuft and replanting; separated parts will flower again in two to three years. Flowering from seed commences after about four years.

The natural distribution of the species is small, occurring in the Humansdorp to Uitenhage area of the Eastern Cape.

The habitat is the semi-arid scrubland common in that region. The plant has been described as vulnerable early in the twenty first century, due to habitat degradation and illegal plant collection (Bond and Goldblatt, 1984; Eliovson, 1984; www.plantzafrica.com; http://redlist.sanbi.org).