Home » TYPES » Herbs » Sphenostylis angustifolia flower near Roossenekal
Back to Category Overview
Total images in all categories: 11,538
Total number of hits on all images: 6,618,646 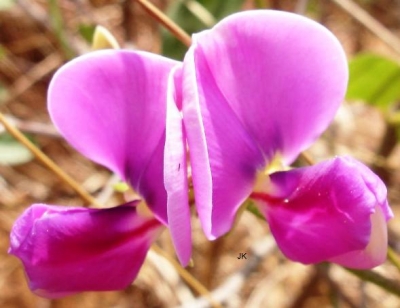 Sphenostylis angustfolia or commonly the wild sweetpea is a perennal growing annual, erect or spreading stems from a large, woody rootstock to heights from 30 cm to 50 cm. The leaves are trifoliolate.

Bright pink flowers shaped like peaflowers are produced early in spring. There is a yellow spot on the banner petal, occasionally this is white fading to cream. The style is flat and more or less spoon-shaped. There is also a white-flowered form of this plant.

The species is distributed in the northeast of South Africa, in KwaZulu-Natal and the provinces north of the Vaal River, slightly into the Free State.

The habitat is largely Highveld and other rocky grassland receiving summer rain. The species is not considered to be threatened in its habitat early in the twenty first century (Van Wyk and Malan, 1997; http://redlist.sanbi.org).