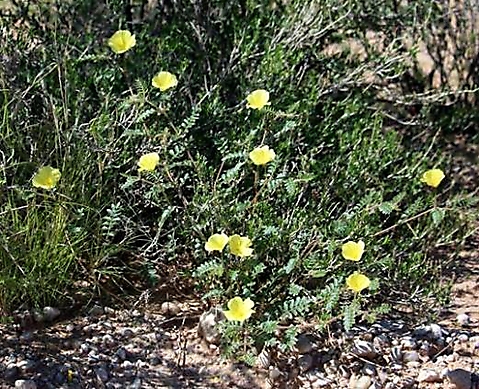 The stems of a Tribulus zeyheri subsp. zeyheri plant may also curve up, defying gravity on the strength of their fibre. As with people, only a minority has the urge to display feats of strength after a short phase in youth.

Growing in and among grass, the lack of effort might limit access to sun and pollinator traffic. Leaning on neighbouring plants for support solves such problems.

The flowers are yellow or white with yellow centres, around 2 cm in diameter.

Beyond the South African border the subspecies is widespread in the western and central parts of southern Africa. The photo was taken in the Kgalagadi (www.zimbabweflora.co.zw).