Home » TYPES » Herbs » Silene undulata subsp. undulata
Back to Category Overview
Total images in all categories: 11,538
Total number of hits on all images: 6,618,381 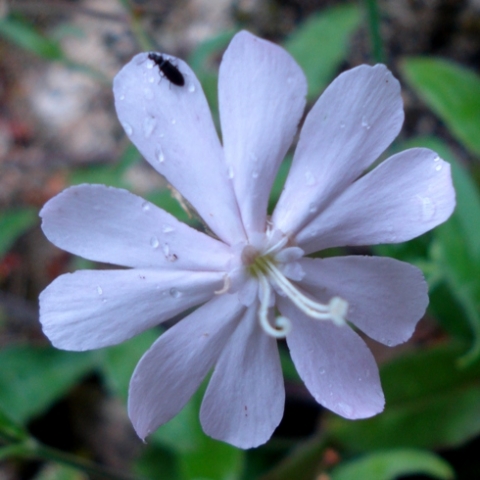 Silene undulata subsp. undulata, commonly known as campion or wild tobacco and in Afrikaans as motblom (moth flower), is a soft perennial reaching heights ranging between 15 cm and 80 cm. The plant is sticky, covered in gland-tipped hairs. Its leaves are variably shaped with entire margins: those at the base are spoon-shaped, up to 15 cm long, while smaller lance-shaped ones occurring up the stems become 8 cm long.

The white or pink flowers have long calyx tubes and stalked petals that spread at the mouth. The five petals are two-lobed, attached halfway up their length. The lobe tips broaden to rounded or nearly square shapes, the petal margins at the lobe tips often more or less notched. Flowers open mostly at night when they are fragrant.

The plant's distribution is very widespread. It grows in nature in all nine provinces of South Africa, as well as in southern Africa and tropical Africa. The habitat is damp slopes and flats. The subspecies is not considered to be threatened in its habitat early in the twenty first century. This one was photographed at Caledon in November.

The other subspecies of S. undulata is subsp. polyantha. It is restricted to the northeastern parts of South Africa from KwaZulu-Natal to the Lowveld. S. undulata used to be known as S. capensis (Manning, 2007; Vlok and Schutte-Vlok, 2010; iNaturalist; www.plantzafrica.com; http://redlist.sanbi.org).