Home » TYPES » Herbs » Rumex lativalvis red flowers and fruit covers
Back to Category Overview
Total images in all categories: 11,538
Total number of hits on all images: 6,618,396 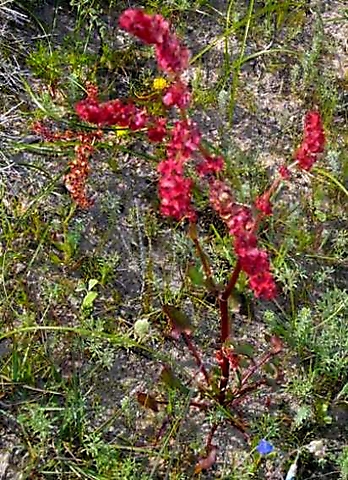 The branched, erect stems of Rumex lativalvis are often reddish, its taproot apparently as well. The long red petioles of the radical leaves, those arising directly from the slightly below-ground stem part or the upper part of the root, appear similar to the branches.

The small flowers and fruits are densely clustered along the upper stems. They are pinkish red, the old flowers enlarging to form three-winged covers over the fruits.

R. acetosella, commonly sheep sorrel, is an exotic and common weed in some parts of South Africa. This is a smaller plant with erect stems, its leaves shaped like arrowheads and the flowers notably smaller. The plant is used medicinally (Manning and Goldblatt, 1996; iNaturalist).