Home » TYPES » Herbs » Rumex lativalvis
Back to Category Overview
Total images in all categories: 11,538
Total number of hits on all images: 6,618,670 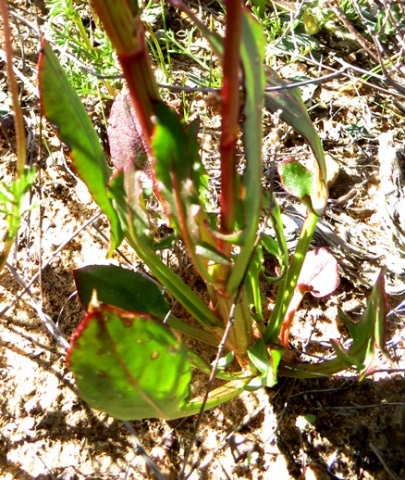 Rumex lativalvis is an erect perennial reaching heights up to 50 cm. The sturdy, sparsely branched stem is longitudinally lined, the stem nodes conspicuous.

The basal leaves growing in a tuft are bigger than the alternate stem-leaves higher up. The leaf-shape is hastate or spear-shaped with protracted, angular lobes growing laterally from the leaf-base. The leaf margins are finely toothed near their tips, entire lower down.

The plant, a South African endemic, is found in the Western Cape and the Eastern Cape. It grows on sandy flats and dunes. The species is not considered to be threatened in its habitat early in the twenty first century.

The leaves of several South African Rumex species, commonly called dock, are cooked as pot herbs, similarly to sorrels. Some of these plants are toxic to livestock (Van Wyk and Gericke, 2000; Bond and Goldblatt, 1984; Leistner, (Ed.), 2000; iNaturalist; http://redlist.sanbi.org).