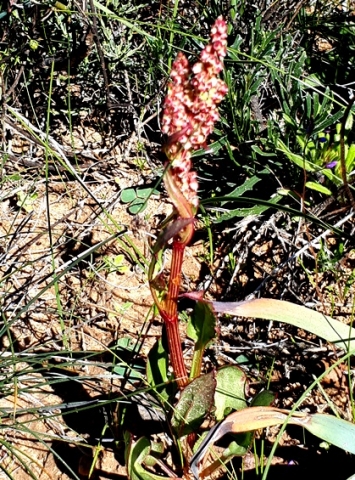 Rumex cordatus, commonly known in Afrikaans as maksuring (tame sorrel) or tongblaar (tongue leaf) and botanically previously as R. sarcorrhizus, is an erect perennial, sometimes an annual that grows from a tuber, reaching 50 cm in height. The thickish stem is longitudinally lined or ridged.

The leaves mainly form a basal tuft, the few stem-leaves smaller and alternate. The leaf-shape is ovate, roundly lobed at the base and the margins entire. The leaves are up to 9 cm long.

The small red flowers grow in whorls in a raceme. The perianth segments of the individual flower grow in two whorls of three. There are six stamens and a three-angled ovary, enclosed in the persistent perianth during the fruiting stage. Flowering happens late in winter to mid-spring. The fruits are red.

The species distribution is in Namaqualand in the Northern Cape, the Karoo in the Western Cape and Eastern Cape to KwaZulu-Natal.

The plants grow widespread on sandy flats and lower slopes among diverse vegetation. The species is not considered to be threatened in its habitat early in the twenty first century.