Home » TYPES » Herbs » Rhinacanthus xerophilus
Back to Category Overview
Total images in all categories: 11,538
Total number of hits on all images: 6,618,290 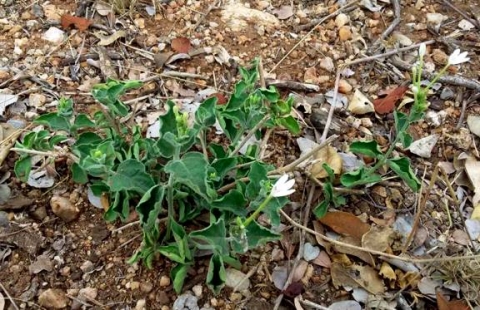 The simple, short-stalked leaves are opposite on the soft, nearly cylindrical, green stems. The leaves are broadly ovate, tapering to pointed tips, the bases lobed. The soft, dark green to dull green blades are pale below, the margins entire and wavy, sometimes curving in. Young leaves are hairy on their lower surfaces. The four or so pairs of lateral veins ascend from the midrib, curving in across and recessed in the blades, not reaching the margins. Some secondary veining, also sunken on top sometimes cause a slightly quilted appearance on the blades.

The species distribution is limited to the northeast of Mpumalanga and the east of Limpopo, much more widely distributed in southern African beyond the border.

The habitat is hot, summer rainfall land at lower elevations. The species is not considered to be threatened in its habitat early in the twenty first century (Leistner, (Ed.), 2000; JSTOR; iNaturalist; http://redlist.sanbi.org).