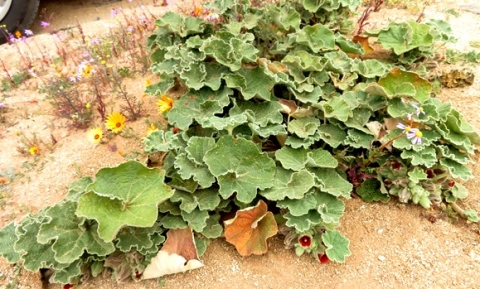 Radyera urens, commonly known in Afrikaans as the sandpampoentjie (little sand pumpkin) and earlier Allenia urens or Hibiscus urens, is a prostrate perennial. There are only two species in this Malvaceae genus, this one in southern Africa and another in Australia.

The foliage covers not only the flowers on the stems but also the ground over the roots, cooling the growth conditions for all other plant parts somewhat.

The plant occurs widespread in the western and southern parts of South Africa, in the Western, Eastern and Northern Cape as well as in the Free State, North West and even into the southwest of Gauteng. The photo was taken on a sandy flat at Goegap near Springbok.

The plants grow in semi-arid to arid terrain in different, often sandy soils and in disturbed patches. The species is not considered to be threatened in its habitat early in the twenty first century.