Home » TYPES » Herbs » Radyera urens flower
Back to Category Overview
Total images in all categories: 11,523
Total number of hits on all images: 6,599,589 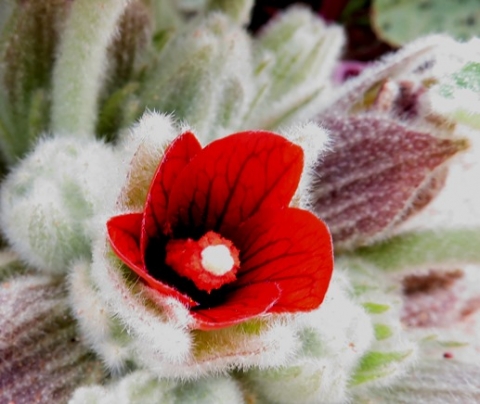 There is an epicalyx below the calyx consisting of twelve hairy, linear bracts attached to each other near the base. The calyx is bell-shaped, its lobes shorter than its tube. In picture, the calyx margins are densely white-woolly. Where outer sepal surfaces are visible in the photo, they appear maroon, covered in whitish stubble with longitudinal ridges down the surfaces. The calyx is accrescent, meaning that it continues to grow after flowering is over.

The five petals of the flower corolla overlap each other in a circle, their formation like windmill blades around the flower centre, one margin inside, the other out. Dark veins grow on each petal from the base, diminishing and branching as they approach the upper margins but never reach them. Petal tips are rounded or pointed. A flower becomes about 4 cm long.

The staminal column in the flower centre is shorter than the petals, its tip truncated. It bears numerous horseshoe-shaped anthers in its upper half. The ovary has five locules, the undivided style cylindrical and the stigma five-grooved.