Home » TYPES » Herbs » Radyera urens leaves
Back to Category Overview
Total images in all categories: 11,523
Total number of hits on all images: 6,599,513 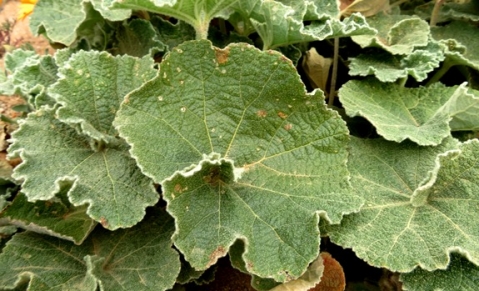 The alternate leaves of Radyera urens are long-stalked and simple. The leaves of a thriving plant form a canopy over the flowers, high enough for cool air to move below them in the shaded space among the stem columns resembling a miniature temple where the flowers may be worshipped in some comfort by their pollinators.

The leaves are heart- to kidney-shaped, deeply lobed at the base, rendering them nearly circular. The seemingly overgrown basal lobes of the blade overlap, cramped for space.

About seven cream-coloured veins radiate from the leaf base, which is also the stalk tip. Some of these veins branch once or twice before they near the margin and disappear from sight. The veins are prominent on the slightly to markedly pale lower leaf surface.

The dark to dull green upper blade surface is quilted or wrinkled and coarse from bulges among its net-veining. The margins are shallowly lobed and irregularly, angularly toothed. Mature leaves have lost some of the hairiness of their younger days. The leaf becomes about 12 cm in diameter.

One of the Afrikaans names of the plant is pampoenbossie (little pumpkin bush) on account of the leaf resemblance to that of pumpkin plants. This plant is not browsed (Le Roux, et al, 2005; Leistner, (Ed.), 2000; Eliovson, 1990; iNaturalist).