Home » TYPES » Herbs » Pygmaeothamnus chamaedendrum
Back to Category Overview
Total images in all categories: 11,506
Total number of hits on all images: 6,494,249 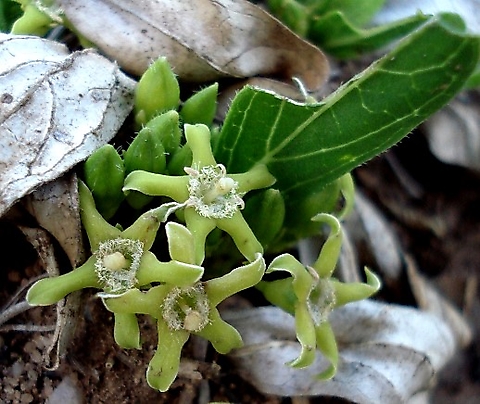 The sessile leaves are elliptic to oblong with rounded tips and entire margins. They are variably hairy, also variable in shape. Spaced, lateral veins from the pale midribs curve in from the margins. There are scaly stipules at the leaf-bases.

The scented flowers grow in branched clusters, often below the leaves, on short, hairless, five-lobed calyces. The greenish yellow, star-shaped corollas have short tubes and five, curved-back lobes, oblong with pointed tips. Flowering happens from before midspring to summer.

The fleshy, shiny green fruit is a globose to ellipsoid drupe, 1,5 cm long and edible.

The species distribution is in KwaZulu-Natal, the Free State and the provinces north of the Vaal River. The plant grows in rocky places. There are two varieties, neither of which is considered to be threatened in its habitat early in the twenty first century (Pooley, 1998; iNaturalist; http://redlist.sanbi.org).