Home » TYPES » Herbs » Pycnostachys urticifolia
Back to Category Overview
Total images in all categories: 11,506
Total number of hits on all images: 6,515,897 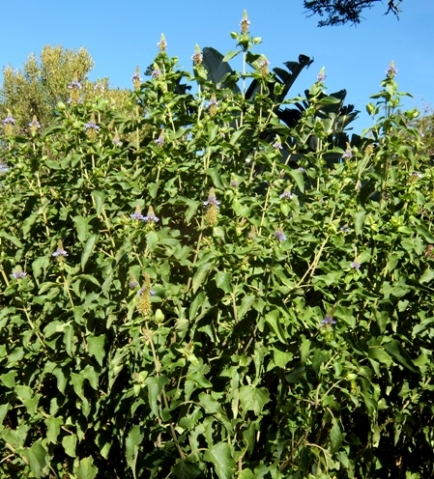 Pycnostachys urticifolia, the large hedgehog-flower, is an evergreen aromatic perennial that reaches 2,5 m in height. This is about what this Kirstenbosch specimen had achieved at the time of the April photo, fitting well into the plant’s bloom-time.

The species distribution is in the far northeast of South Africa, in the Mpumalanga and Limpopo Lowveld. The distribution extends beyond the border in Mozambique, Zimbabwe and further into tropical Africa. The habitat is low-lying marshy terrain, moist grassland and forest margins. The species is not considered to be threatened in its habitat early in the twenty first century.

The plant in picture has grown dense foliage on its Kirstenbosch slope, although much stem is still visible. Maybe the colder winters and dryer summer ground of its adopted home bring modification to its growth habit (Onderstall, 1984; Manning, 2009; www.plantzafrica.com; www.zimbabweflora.co.zw; www.redlist.sanbi.org).