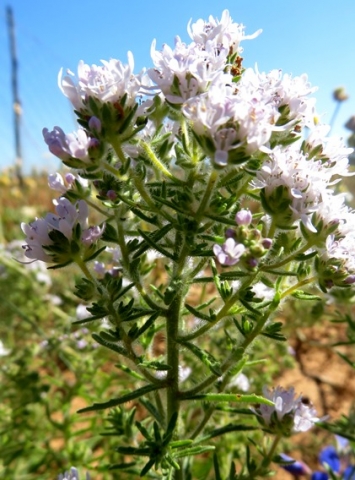 Pseudoselago is a genus of mostly annual and perennial herbs as well as some subshrubs in the Scrophulariaceae or snapdragon family.

The stems branching at the base and higher up may be erect or decumbent, usually winged or ridged by leaf bases extending down. Axillary tufts of new, smaller leaves are common. The leaves are opposite near the base of the plant, usually alternate higher up and often toothed in their upper halves.

The small, stalkless, tubular flowers grow in flat-topped or rounded spikes, corymbs or panicles. The corolla is white or mauve in colour, the tube funnel-shaped or cylindrical. Some species have an orange patch at the flower mouth, while all have two-lipped, five-lobed corollas.

The four stamens in unequal pairs grow from near the top of the corolla tube. The ovary has a small nectary attached to its back and only one ovule per chamber.

The 28 species of Pseudoselago almost all grow in winter rainfall fynbos, mostly in the Western Cape, while a few are found in the Northern Cape and the Eastern Cape.