Home » TYPES » Herbs » Pseudoselago spuria hosting the beetles
Back to Category Overview
Total images in all categories: 11,506
Total number of hits on all images: 6,503,257 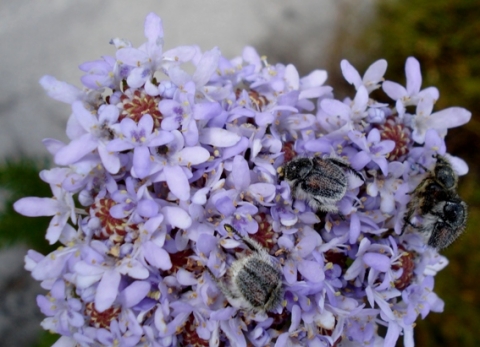 The mauve flowers of Pseudoselago spuria grow in flat-topped clusters of spikes at stem tips. Flowers growing in a spike have no stalks. The flowers are funnel-shaped and two-lipped.

The four stamens occur in two unequal pairs. The pollinators active here are thought to be monkey beetles or scarab beetles of the Hopliini tribe. Neither the pale anthers on the erect stamens nor the flower stigmas should be missed by these hairy visitors, only here to extract nectar from the flower tubes (Manning, 2007; Bean and Johns, 2005; iSpot).