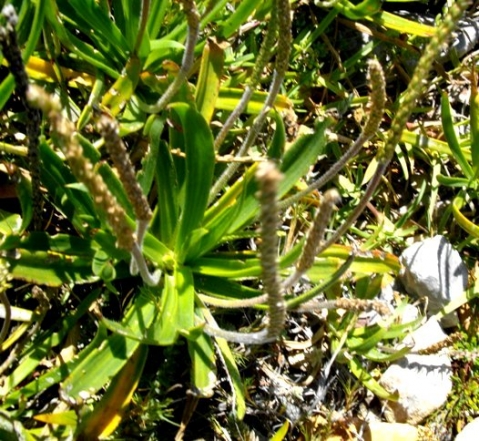 Plantago crassifolia var. crassifolia is a rhizomatous perennial that grows from a thick, scaly rootstock. It develops a dense underground root network from which tufts of erect, narrow, strap-like leaves grow. The plant is hardy. It forms dense mats of 10 cm to 20 cm in height.

The leaves are from green to a dull blue-green in colour. Leaf texture is thickly fleshy, sometimes described as semi-cylindrical in shape. The leaf margins are usually entire, but some may be slightly toothed. There are Plantago species with markedly toothed leaves, such as P. coronopus which is not indigenous to South Africa, just like the troublesome local weed, P. lanceolata.

The tiny flowers of P. crassifolia var. crassifolia are clustered densely on erect spikes, carried upon smooth green stalks. Flowering occurs in spring and summer. Each small flower has a three-lobed white corolla and pale yellow anthers, but the spike usually appears brown as only a few flowers are open at one time (Niebuhr, 1970; Bromilow, 1995; Bond and Goldblatt, 1984; www.pfaf.org).