Home » TYPES » Herbs » Plantago crassifolia var. crassifolia
Back to Category Overview
Total images in all categories: 11,506
Total number of hits on all images: 6,515,962 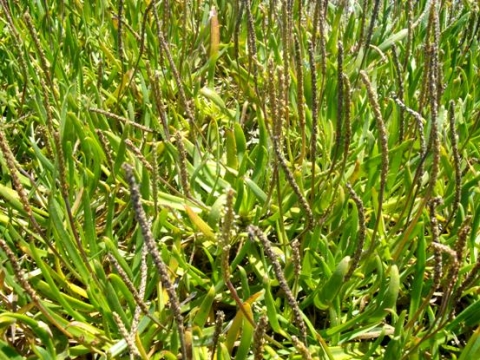 This matted herb, known as goose’s tongue or botanically as Plantago crassifolia var. crassifolia, is often ignored as a less pretty plant of the South African south coast.

It grows near salt water between the Cape Peninsula and Port Elizabeth. The habitat is coastal marshes, estuaries and lagoons, places with sandy or muddy, brackish soil. The variety is not considered to be threatened in its habitat early in the twenty first century.

The Khoi tribes of the past did not ignore it though. They knew it well as an edible plant. For Plantago crassifolia has long been a boon to some of the world’s hungry people. Strollers today may see spreading clumps of goose’s tongue at the water’s edge of the Bot River Estuary, or at Rooisand between Kleinmond and Hermanus; feeling no inclination to taste some leaves. Right here, long ago, indigenous beachcombers may well have been harvesting leaves looking like these.

Around the Mediterranean and in North Africa, goose’s tongue is still recognised as a survival food. The young leaves are eaten raw or cooked (Niebuhr, 1970; Bond and Goldblatt, 1984; www.pfaf.org; http://redlist.sanbi.org).