Home » TYPES » Herbs » Monopsis unidentata
Back to Category Overview
Total images in all categories: 11,506
Total number of hits on all images: 6,488,645 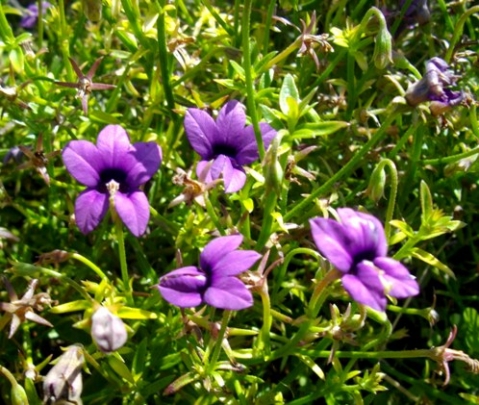 Monopsis unidentata is a perennial with soft leaves and stems that die down for a short period in winter, resprouting in spring. The alternate leaves on the plant in picture are narrow, tapering to acute tips and not toothed along the margins as they sometimes are.

M. unidentata has two-lipped flowers, brown or purple in colour. The lower lip is two-lobed, split to the base; the upper one has three lobes. The base of the corolla is darker than outwards upon the upper parts of the flower lobes. The stamens are joined in a ring; the stigma has two lobes. The calyx consists of five narrow sepals.

The species is found along the coast and slightly inland in the Western Cape, the Eastern Cape and KwaZulu-Natal. It comprises three subspecies, none of which is considered to be threatened in its habitat early in the twenty first century. The plants typically grow on damp, sandy flats and rocky slopes (Manning, 2009; iSpot; http://redlist.sanbi.org).