Home » TYPES » Herbs » Monopsis unidentata subsp. unidentata
Back to Category Overview
Total images in all categories: 11,894
Total number of hits on all images: 7,136,493 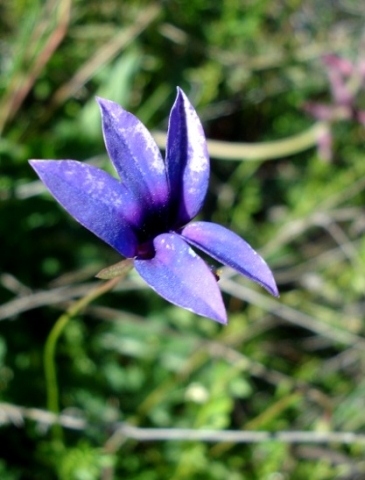 The wild violet, as Monopsis unidentata subsp. unidentata is commonly known, is a perennial herb that may sprawl or grow erectly to 60 cm. The narrowly elliptic leaves usually have toothed margins.

Flowers grow on long slender pedicels at branch tips in spring and summer. The flowers are two-lipped and bluish purple. There are at least three recognised subspecies. Some of them may also have brownish yellow or white flowers. The flower has a dark centre. It reaches a size of about 1 cm in diameter. The petal lobes of the specimen in this photo appear slightly more pointed and shinier than many of the M. unidentata flowers seen.

The distribution of the species, a South African endemic, is coastal from Bredasdorp in the Western Cape to the south of KwaZulu-Natal. The habitat is damp sandy flats and rocky slopes. The subspecies is not considered threatened in its habitat early in the twenty first century, its population thought to be stable (Manning, 2009; Bond and Goldblatt, 1984; www.plantzafrica.com; http://redlist.sanbi.org).