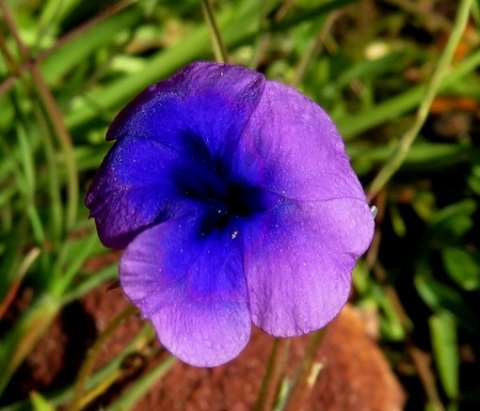 The flowers of Monopsis debilis are borne solitary on slender, erect pedicels from leaf axils near branch tips.

The five petals or lobes of the corolla spread flatly in almost radially symmetric fashion; the three of the upper lip split to the base from the two of the lower lip. The corolla presented above the leaves is about circular, about 1,5 cm in diameter. The petals in picture each has two rounded lobes at its tip and a tiny, pointed protrusion on the margin where these lobes meet. The purple, blue-purple or violet corolla is darker near the small flower mouth. Flowering happens late winter and early spring.

This plant is thought to be M. debilis var. gracilis. It was found flowering near water at Naries, west of Springbok in Namaqualand during August (Manning, 2007; Le Roux, et al, 2005; Eliovson, 1990; iNaturalist).