Home » TYPES » Herbs » Kniphofia ritualis
Back to Category Overview
Total images in all categories: 12,086
Total number of hits on all images: 7,380,964 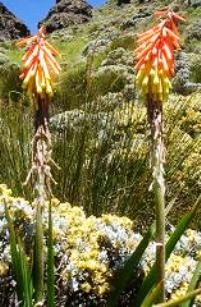 Kniphofia ritualis, the Lesotho poker, grows as the name suggests, in Lesotho and adjacent higher altitude parts of KwaZulu-Natal, Free State and Eastern Cape. The habitat is typically exposed, summer rainfall grassland. The species is not considered to be threatened in its habitat early in the twenty first century.

The plant reaches heights of 80 cm when flowering. The leaves are narrow and linear, V-shaped in cross-section and finely toothed along the margins. The flowers are tubular in shape, nodding from a dense erect raceme. Flower colour is orange-red, opening to pale yellow. Stamens hardly protrude from the open flowers.

This is a good garden plant, suited to well-drained, sunny positions, requiring average to ample watering. The plant is semi-deciduous. It attracts birds during both the flowering and fruiting phases (Manning, 2009; http://redlist.sanbi.org).