Home » TYPES » Herbs » Kniphofia fluviatilis
Back to Category Overview
Total images in all categories: 12,081
Total number of hits on all images: 7,379,577 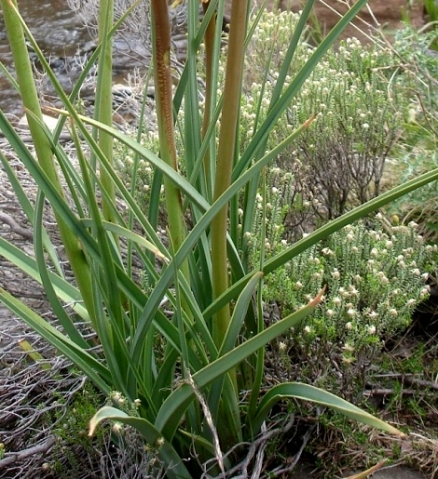 The dense clump of leaves of the river poker, Kniphofia fluviatilis, grows from an underground rhizome.

The V-shape of the soft, fibrous leaves, dull grey-green in colour, is well displayed on the plant in the photo that was taken next to a creek in Lesotho. The leaves are up to 2,5 cm wide, tapering and curving slowly to the tips that show seasonal damage here. The scapes standing erectly among the leaves, are sturdy and green or tinged with purple.

The plant is found inland in vleis and near watercourses at higher elevations in the summer rainfall grasslands of South Africa. The species is not considered to be threatened in its habitat early in the twenty first century.

The leaves of this species resemble those of another Drakensberg species, K. caulescens, the leaves of which become doubly as wide (Manning, 2009; iSpot; http://redlist.sanbi.org).