Home » TYPES » Herbs » Kniphofia fluviatilis
Back to Category Overview
Total images in all categories: 11,632
Total number of hits on all images: 6,749,694 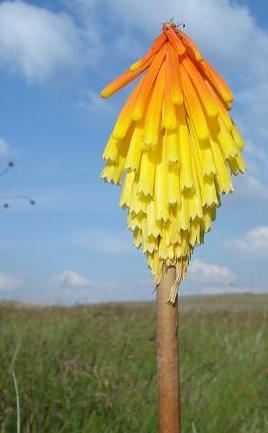 River poker is the common name of Kniphofia fluviatilis. This confirms the feature suggested by the specific epithet of fluviatilis, meaning river-like; appropriate for a plant found in grassy vleis. The habitat is mostly higher altitude grassland, often among mountains. The poker component relates to the generally used red-hot poker name for Kniphofia, applied to several of the species and referring to the typical flower form shared in the genus.

The river poker is rhizomatous, i.e. having clusters of thick fleshy roots. It is not surprising that Kniphofia is botanically part of the Asphodelaceae family, resembling particularly flowers of the Aloe genus. This species grows to 70 cm in height when in flower. The buds are pendulous, red to orange in colour, until the yellow takes over when they open, starting from the lower end of the raceme.