Home » TYPES » Herbs » Impatiens hochstetteri
Back to Category Overview
Total images in all categories: 11,241
Total number of hits on all images: 5,956,949 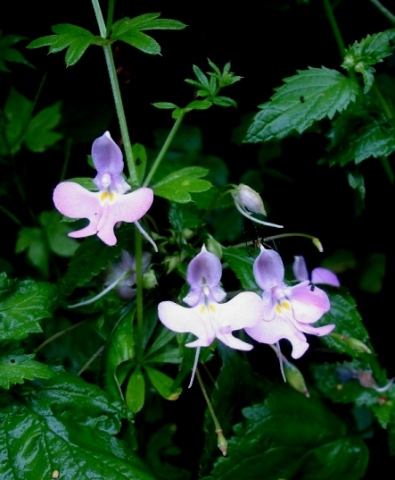 Impatiens hochstetteri, the common wild impatiens, is a herb, sometimes surviving to be a perennial, in other cases only an annual. The branched stems are brittle and semi-succulent. The slightly hairy leaves are ovate with long attenuating tips and scalloped margins.

Flowers grow solitary from upper axils at any time of the year. The lower sepal has a long, thread-like spur, seen to protrude from behind some of the flowers in picture. The flowers are mauve or pink, in this case a bit of both. The corolla shape is two-lipped, the lower two petals being two-lobed (on this specimen pink with small yellow blotches at the base), the others much smaller and bluish purple here.

The habitat is forest and damp shady spots of the eastern parts of South Africa from the Eastern Cape to Limpopo. There is also a southern coastal area where the plant grows, extending into the Western Cape. The species is not considered to be threatened in its habitat early in the twenty first century (Manning, 2009; http://redlist.sanbi.org).