Home » TYPES » Herbs » Hermbstaedtia odorata
Back to Category Overview
Total images in all categories: 11,528
Total number of hits on all images: 6,611,542 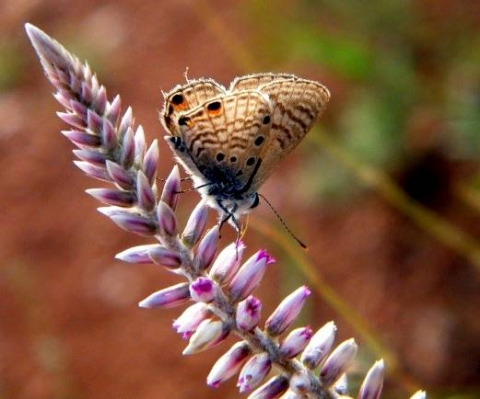 Hermbstaedtia odorata, commonly the wild cockscomb, cat's tail and in Afrikaans the rooiaarbossie (little red vein bush), is a slender herb branching from a perennial, tuberous rootstock, reaching heights up to 60 cm.

The leaves are usually alternate, shortly stalked, oblong and tapering at both ends. They are about 5 cm long, 1 cm wide and decreasing in size up the stems.

The inflorescence is an unbranched, elongated spike at a stem-tip, densely flowered with subtending bracts. The bisexual flowers are white and cylindrical to slightly barrel-shaped, tinged pink, red or purple. In picture the colouring is mainly inside the five pointed perianth segment tips where the five stamens are included. Odorata implies that the flowers are fragrant, a feature unmentioned in the available literature.

Flowering happens in summer. The fruit capsule coming later is still included in the perianth.

The species is widely distributed in the northeast of the country, in KwaZulu-Natal, Mpumalanga, Limpopo and North West, as well as in neighbouring parts of southern Africa.

The habitat is grassland and woodland. The species is not considered to be threatened in its habitat early in the twenty first century.

There are three varieties of this species, the one shown here possibly var. odorata. The leaves are sometimes eaten as a spinach dish. The plant features in traditional medicine and, last maybe least, as a love charm (Pooley, 1998; Van Wyk and Malan, 1997; iNaturalist; http://redlist.sanbi.org).