Home » TYPES » Herbs » Hermbstaedtia fleckii
Back to Category Overview
Total images in all categories: 11,411
Total number of hits on all images: 6,178,450 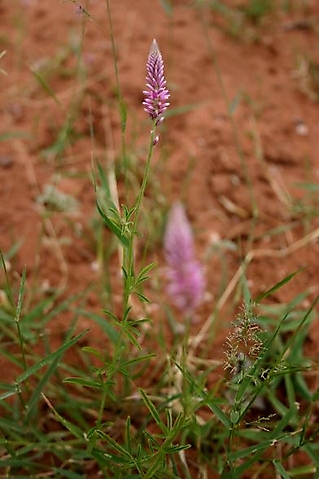 The rough-haired leaves are linear to slightly oblanceolate and channelled with entire margins.

The pinkish white to bright magenta flowers grow in dense terminal spikes. The narrow corolla tubes end in pointed petal lobes. The stamens have filaments fused together nearly to the anthers. Flowering happens in summer, often profusely after rain.

The fruit is a small capsule, the seeds black, 1 mm in diameter.

The species distribution is in Limpopo, North West and the Northern Cape, as well as some neighbouring countries, at least Botswana and Zimbabwe.

The habitat is exposed flats in clayey or sandy soils, widespread in the Kalahari in pans and dry riverbeds. The species is not considered to be threatened in its habitat early in the twenty first century (Van Rooyen and Van Rooyen, 2019; iNaturalist; www.plantsoftheworldonline.org; http://redlist.sanbi.org).