Home » GENERA G-H » Hemimeris » Hemimeris sabulosa
Back to Category Overview
Total images in all categories: 10,212
Total number of hits on all images: 4,867,540 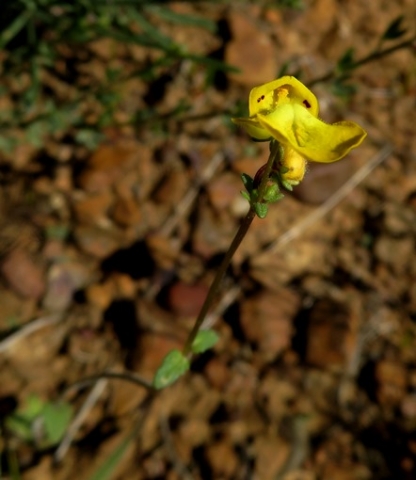 Hemimeris sabulosa, commonly known as the great monkey-face, is an erect or prostrate annual reaching heights between 3 cm and 50 cm. The sometimes-branched plant is sticky-haired with stems tending to be square in cross-section.

The species distribution is coastal in the Western Cape and slightly into the Northern Cape. The plants are known around Clanwilliam, to the Cape Peninsula and to Caledon. The photo was taken at the Matjiesfontein flower farm near Nieuwoudtville.

The habitat is sandy flats, largely coastal. The species is not considered to be threatened in its habitat early in the twenty first century (Privett and Lutzeyer, 2010; Manning and Goldblatt, 1997; Bond and Goldblatt, 1984; iNaturalist; http://redlist.sanbi.org).