Home » TYPES » Herbs » Hemimeris sabulosa flower
Back to Category Overview
Total images in all categories: 9,913
Total number of hits on all images: 4,613,598 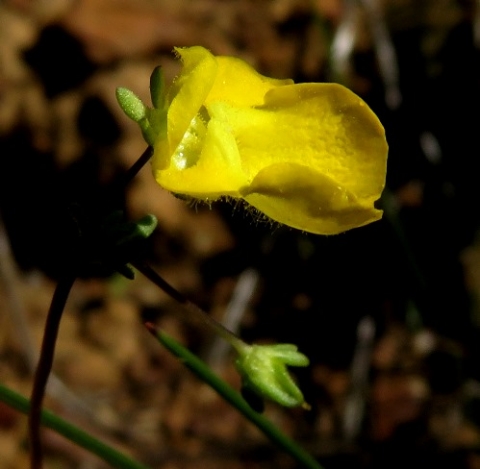 The pouched corolla is two-lipped and four-lobed, the lobes rounded. The large, lower lip is dominant, hairy on its outer surface in picture. The short tube at the corolla base has two small spurs of 1,5 mm to 3 mm long. The pale canary yellow flowers usually have tiny dark spots inside the corolla. There are only two stamens, sharply bent and concealed in pockets of the corolla. Flowers are from 7 mm to 13 mm long. Flowering happens from late winter to shortly after midspring.

Hemimeris flowers are pollinated by oil-collecting bees of the Melittidae family, some of the oldest known types of bees in existence. Fossil remains of melittid bees have been found in Eocene amber deposits, including those of Oise, France and the Baltic region (Privett and Lutzeyer, 2010; Manning and Goldblatt, 1997; Bond and Goldblatt, 1984; iNaturalist; Wikipedia).