Home » TYPES » Herbs » Hemimeris racemosa flower cluster
Back to Category Overview
Total images in all categories: 9,915
Total number of hits on all images: 4,615,720 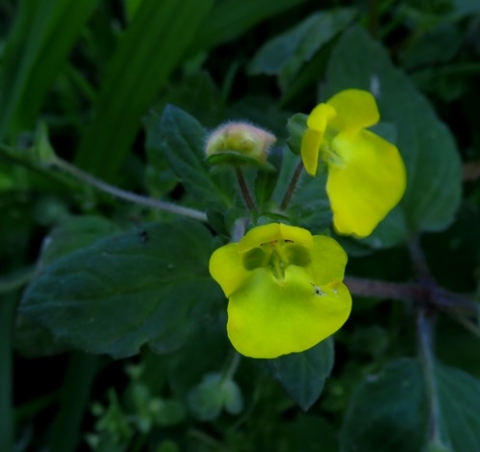 A cluster of flowers may appear at each node in the inflorescence of Hemimeris racemosa.

The specific name, racemosa, indicates that the flowers are borne in a raceme. A raceme is a flower cluster of which the separate flowers are attached by short, equal stalks at equal distances along a central stem. So, the species is not quite as racemose as the definition indicates, bearing clusters at individual nodes. The lowermost flower in a raceme develops first, the one right at the top, if it ever opens, last.

Rounded parts of some five-lobed calyces are visible in the photo. The large lower lip of the corolla shows its two spurs or shallow pouches in the laterally extended cup. The upper lip has dark spots, mostly obscured in picture.

This species was previously known as H. montana (Manning, 2009; Vlok and Schutte-Vlok, 2010; Wikipedia).