Home » TYPES » Herbs » Hemimeris racemosa
Back to Category Overview
Total images in all categories: 9,727
Total number of hits on all images: 4,364,976 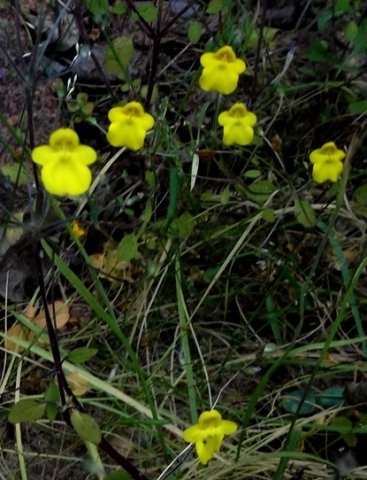 Hemimeris racemosa, commonly known as yellow faces, is an annual herb growing to heights between 3 cm and 50 cm. The plant has sparse, sticky hairs on its square stems often branching from the base.

The opposite leaves are ovate with toothed or lobed margins and variably hairy. Leaf dimensions are 6 mm to 25 mm by 2 mm to 15 mm.

The flowers grow in racemes. The buds are covered in sticky glandular hairs on the sepals. The yellow corolla is two-lipped and four-lobed around the central cup. The three lobes of the upper lip are collectively smaller than the single one of the lower lip. Some brown spots occur on the upper lip.

There is a pair of shallow spurs at the base of the lower lip, 1,5 mm to 3 mm long. The flower becomes 7 mm to 13 mm long. It has two stamens that are sharply bent.

Flowering happens from midwinter to midspring. The fruit capsule contains many small seeds.

The species distribution is coastal and slightly inland from Namaqualand to Knysna. The photo was taken in the Gifberg in October.

The habitat is sandy flats and lower slopes in arid fynbos and renosterveld. The species is not considered to be threatened in its habitat early in the twenty first century (Bean and Johns, 2005; Manning, 2007; Manning and Goldblatt, 1996; iNaturalist; http://redlist.sanbi.org).