Home » TYPES » Herbs » Heliotropium steudneri
Back to Category Overview
Total images in all categories: 11,921
Total number of hits on all images: 7,168,511 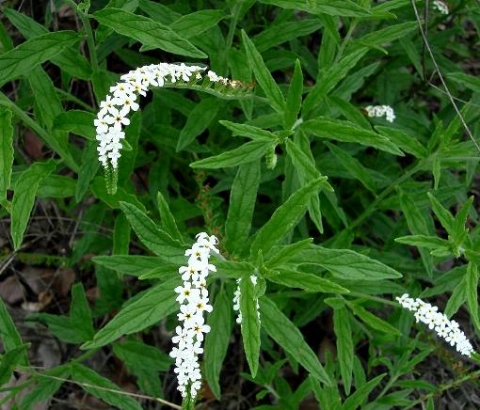 Heliotropium steudneri, commonly known as the common string-of-stars or the wild forget-me-not and previously as H. nelsonii, is a hairy, much-branched perennial that grows to heights from 60 cm to 90 cm from a woody base.

The alternate leaves are short-stalked or stalkless and lance-shaped with acutely pointed tips. The margins are entire but slightly wavy and sometimes perceptibly sinuate. The dark green, bright green or grey-green blades have sunken midribs and spaced, incurving lateral veins that do not quite reach the margins. The leaves are from 2 cm to 6 cm long and up to 1,5 cm wide.

The white flowers are arranged in a long, stem-tip spike, densely together and pointing to one side (secund). In the case of this plant the direction the flowers face is usually up; sometimes growing in a forked pair of inflorescences. The inflorescence tip is characteristically curved or scorpioid, typical in the Boraginaceae or forget-me-not family.

The generic name, Heliotropium, is derived from the Greek words helios meaning sun and tropos meaning a turn, referring to the earlier, now disproved belief that some flowers, particularly sunflowers and those of this genus, face and follow the sun.

The flower is tubular, its five elliptic, rounded lobes spreading around the mouth. Flower diameter is 5 mm, its length 7 mm. Flowering happens from spring to early autumn.

The species distribution is in the northern parts of the country from Northern Cape and North West through Gauteng and Limpopo to Mpumalanga and KwaZulu-Natal, as well as to the north as far as Ethiopia.

The habitat is grassland, dry thicket and disturbed places. The species is not considered to be threatened in its habitat early in the twenty first century.