Home » TYPES » Herbs » Hebenstretia parviflora
Back to Category Overview
Total images in all categories: 12,061
Total number of hits on all images: 7,359,851 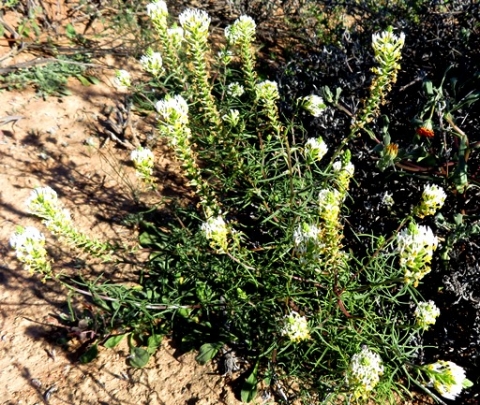 Hebenstretia parviflora, in Afrikaans commonly known as the slakblom (snail flower), is a branching annual reaching heights from 3 cm to 25 cm.

The species distribution is in the Northern Cape, spreading into Namibia and the Western Cape as far as the Little Karoo. This photo was taken a few kilometres to the west of Springbok.

The plants grow on sandy, loam or clay flats in semi-arid parts among various types of vegetation, mainly confined to the winter rain region. It may be prolific on disturbed land, particularly where crop farming has been abandoned. The species is not considered to be threatened in its habitat early in the twenty first century (Vlok and Schutte-Vlok, 2010; Le Roux, et al, 2005; iNaturalist; http://redlist.sanbi.org).