Home » TYPES » Herbs » Hebenstretia dura
Back to Category Overview
Total images in all categories: 11,540
Total number of hits on all images: 6,625,848 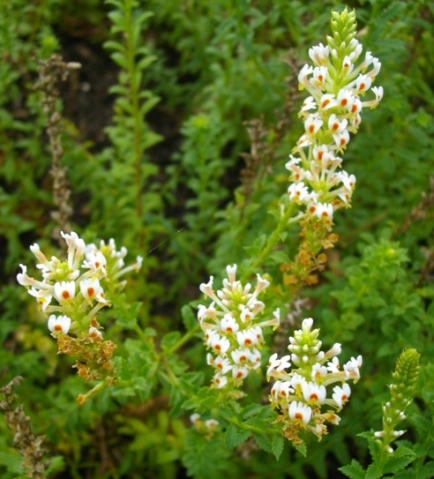 Hebenstretia dura, the cat’s tail or slugwort is a soft perennial  Many erect stems form a bushy clump from branching at the base. The small glossy green ovate leaves are spread densely along the stems. They have finely serrated edges and tapering apices.

The white flowers with their central orange spots bloom in dense spikes between November and April. They are sessile, i.e. without pedicels, have long narrow tubes and four lobes on the upper side of the corolla.

The plant is found in the summer rainfall grassland of the eastern parts of the country including Free State and Gauteng. The species is not considered to be threatened in its habitat early in the twenty first century.

H. dura was evaluated for horticultural merit in a study in Pennsylvania in the USA in 2002 with the following results: performance strengths were vigour, resistance to disease and pests, uniformity in size and foliage appearance. The plant’s ease of cultivation, unique blooms, glossy foliage and small stature were seen to make it ideal for intimate outdoor spaces where its sweet fragrance can be appreciated on warm evenings (www.plantzafrica.com; www.actahort.org; http://redlist.sanbi.org).