Home » TYPES » Herbs » Gymnodiscus capillaris
Back to Category Overview
Total images in all categories: 11,539
Total number of hits on all images: 6,622,031 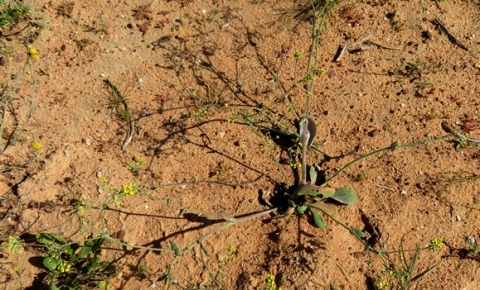 Gymnodiscus capillaris, known as yellowweed and in Afrikaans as skilpadgras (tortoise grass) or geelkruid (yellow herb) and botanically previously as Othonna capillaris, is an annual reaching heights from 5 cm to 20 cm. The long, hairless stems have leaf-like bracts where they branch.

The species distribution is in the west of the Northern Cape among the Namaqua Klipkoppe and in the Western Cape in the western Karoo and coastally as far east as Mossel Bay. The photo was taken near the Maskam Mountain south of Vanrhynsdorp.

The habitat is sandy flats and lower slopes. The species is not considered to be threatened in its habitat early in the twenty first century.