Home » TYPES » Herbs » Gunnera perpensa
Back to Category Overview
Total images in all categories: 11,544
Total number of hits on all images: 6,627,351 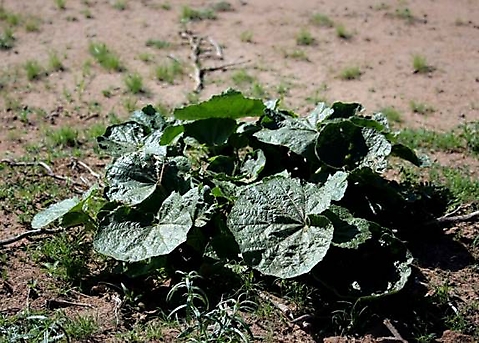 The leaves in picture may be those of Gunnera perpensa, commonly the wild pumpkin or river pumpkin. It is a robust perennial lacking aerial stems, reaching 1 m in height. The plant grows from a brittle, creeping rhizome that becomes 3 cm in diameter and has yellow flesh.

The genus comprises 50 species mainly found in the Americas and some Pacific islands. Only this one occurs in South Africa.

The large, stalked, pumpkin-like leaves grow in a basal tuft. The finely hairy leaves are rounded to lobed with finely toothed margins. Leaf dimensions are up to 25 cm long and 38 cm wide, their petioles up to 45 cm long.

The tiny, red-brown flowers are fleshy, growing in erect spikes up to 90 cm long. The spike tip curves down and is shorter than the leaves. The male flowers grow at the tip of the spike, the female ones at the base. Flowering happens in spring and summer.

The species distribution is mainly in the southern and eastern parts of South Africa but plants are found in all nine provinces. It grows widespread in Africa to Ethiopia.

The habitat is damp, marshy areas and stream banks from the coast to elevations around 2400 m. The species is not considered to be threatened in its habitat early in the twenty first century.

The stems and roots are eaten and used in brewing beer. The plant is widely used in traditional medicine (Pooley, 1998; Moriarty, 1997; Van Wyk and Malan, 1997; iNaturalist; http://redlist.sanbi.org).