Home » TYPES » Herbs » Grielum humifusum leaves
Back to Category Overview
Total images in all categories: 11,419
Total number of hits on all images: 6,200,000 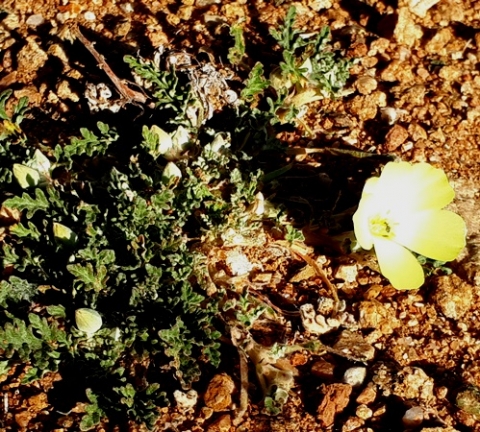 An open flower and some pale, cone-shaped buds are visible upon the mat of Grielum humifusum leaves spreading upon the ground. The photo was taken early in August, the middle of the plant’s bloomtime.

The rounded lateral lobes ascend on the dark-green leaf blades angled up to the also rounded leaf-tip from the prostrate stems. The stems are fleshy, but it is the thick, soft root rich in protein that is regarded as the most eatable part of this plant.

The copious succulence or mucosity of the plant becomes evident when breaking the skin or eating the root. This has earned G. humifusum its Afrikaans name of pietsnot. Some less derogatory common names of duikerwortel (duiker root) and Maritzwater also exist, while the Nama people used to call this plant t’koeibee. If you eat it, you'll name it (Manning, 2007; Le Roux, et al, 2005; Van Wyk and Gericke, 2000).