Home » TYPES » Herbs » Grielum humifusum colour changes
Back to Category Overview
Total images in all categories: 11,506
Total number of hits on all images: 6,488,568 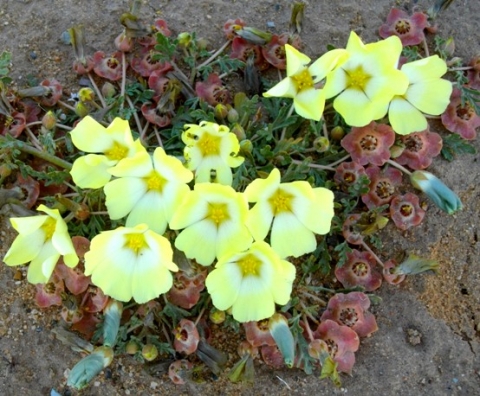 ~Short, yellow-green buds, somewhat cone-shaped, represent the first colour phase. Some of them peep out around the open flowers of the plant in picture.

~When the grip of the sepals is broken by the burgeoning petals, the buds become elongated, the yellow of young petals protruding from the parting calyx lobes.

~During the peak period the open petals spread into a wide bowl-shape, their tips square and slightly jagged in some cases. Their colour is by now pale or bright yellow, but white near the base where the short yellow-anthered stamens surround the style.

~After its heyday, the flower loses its petals and the flat broad purplish base remains from which fruiting and seed formation progress.

This creeping annual has left little to chance, producing flowers as if its life depended on it.

The species is distributed from Namibia through the Northern Cape into the Western Cape as far southeast as Robertson.

Neither of the two varieties of G. humifusum occurring in South Africa is considered to be threatened in their habitats early in the twenty first century (Williamson, 2010; Vlok and Schutte-Vlok, 2010; http://redlist.sanbi.org).